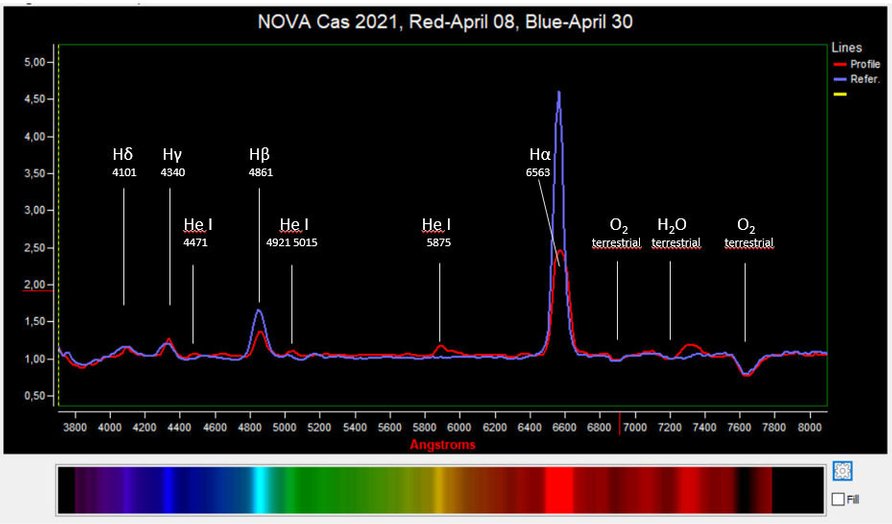 These two spectrograms show the development of the hydrogen and helium lines of the nova. The H-alpha and H-beta lines have increased in flux, while the He-I seems to have declined during this period.

These low resolution spectra were obtained with a 12" Ritchey-Chrétien instrument with an SA200 grating mounted in the filter wheel to the STL11000M camera.

The nova was discovered on March 18 in Japan. The exposures are from the early mornings of April 8 and April 30, so about 3 and 6 weeks after discovery. Here, I have used 300 sec and 50 sec exposures. The spectrograms are normalized to the background flux of the nova. The coloured spectrum is generated from the April 8 exposure.

The hydrogen and helium lines stand out pretty well. On the red side, above 6800 Angstroms, there are some atmospheric (terrestrial) absorption lines.

The photo shows the raw image of the April 30 star field with the nova in the center. The focusing is optimized for the spectra, and has a small offset from the zero order image of the star. North up, blue part right, red part left. 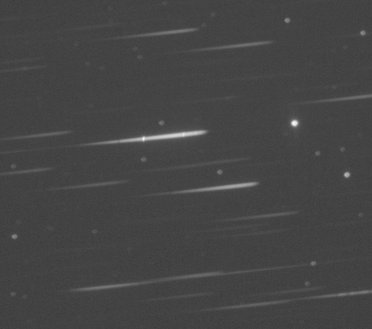 The above spectrum was taken with a 300 lines/mm grating in my homebuilt spectrograph. Exposure was 3x300 seconds with the 12" f/8 Ritchey-Chrétien telescope. An ASM183 CMOS camera was mounted on the spectrograph. Date August 05 2021. The nova was still at about magnitude 8. The H-alpha emission is extremely bright. Note that I use a logarithmic y-axis scale. The He I 5875 line shows a clear P-Cygni profile! FE II lines can be seen, confirming that it is a classical Fe-type of nova, and not a He/N-nova.